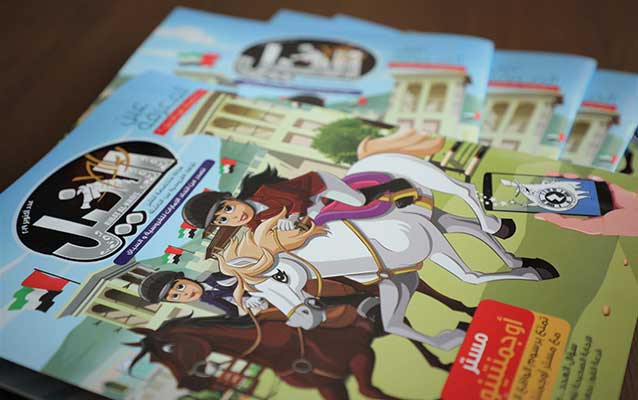 "Rabat Al-Khail" comes as one of the first specialized equestrian magazines for children in the Middle East. It also comes with augmented reality technology which is based on projecting virtual objects and information in the real user environment to provide additional information or act as a directive, in contrast to virtual reality. -Based projection of real objects in a virtual environment. The user can deal with information and virtual objects in augmented reality through several devices, whether portable such as a smartphone or through wearable devices such as glasses, as inputs are interacted with through the application (Zappar) on smartphones, it is worth mentioning that the magazine produced by the company " Vision Cinema is one of the leading national media companies.

During the conference, a ceremony was held in honor of a group of journalists who contributed effectively to the full coverage of all equestrian events inside and outside the country and were created during the highlight of the successes and victories of the UAE riders. Mr. Salah Jaber, CEO of Yas Channel, Amer Salmeen Al Marri, Director of Cinema Vision, the producer of the magazine, Ms. Abigail Bloom, Editor-in-Chief of SHOW HUB magazine, Ms. Siham Abdullah Saeed Al Shehhi, Al Fujairah TV presenter and Mr. Abdullah Ahmad Bahlooq Yas tv journalists.

Major General Dr. Ahmed Nasser Al Raisi, President of the UAE Equestrian and Racing Federation, expressed his great happiness and pride in this important project, which stems from our interest in the future of equestrian sports, as one of the most important objectives of this ambitious project to contribute effectively to attract more young riders, with the interest of His Highness the sheikhs of the UAE unlimited support to sports, Al Raisi added that the Equestrian Federation always seeks more projects that will fully contribute to the development and progress of equestrian sports and create a brilliant future to every kind of the sport.