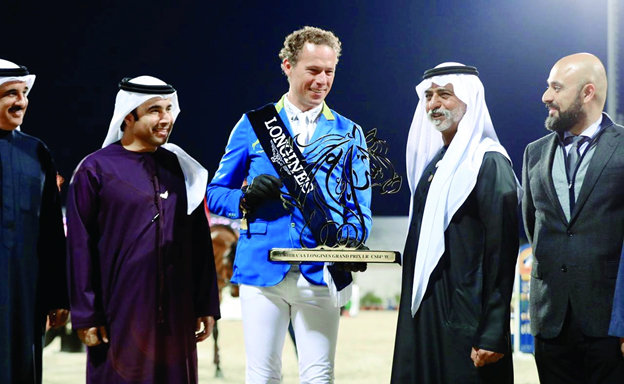 The 46-year-old German, ranked No 10 in the world, was the highest ranked rider and he proved it with a flawless round in a time of 39.16 seconds in the 12-rider jump off on board Solid Gold Z in the grand finale event of the four-day competition.

Ahlmann, who competed in the last three Olympic Games, clocked the second fastest time of 69.19 earlier in the 46-rider round and was the second last rider to go into the jump-off.

“To go out last or second last gives one a slight advantage because you have a target to achieve, but having said that, you still have to go and do it,” the German said after picking up the biggest share of the €94,900 (Dh384,000) prize.

“It was a fantastic day. My horse was remarkable,"Ahlmann said. "I couldn’t have wished for a better job than he did tonight.”

Abdel Said, Egypt’s 31-year-old up and coming star, finished a creditable second on Arpege du Ru in a time of 39.49, with Ireland’s Mikey Pender (39.88) third on HHS Calais.

Bahrain’s Khalid Hilal Al Khatri, on Seirra, topped the 46-rider opening round by clocking the fastest time of 68.68 seconds but he dislodged the second obstacle in the jump-off to finish 10th.

“It’s a very strong competition but two of us did pretty well to finish in the top 20,” Al Marri said of the host nation’s performance in the Grand Prix.

“In this game, you have good days and bad days, but overall we can take a lot of positives forward.”

The Grand Prix was the grand finale of the 16 competitions for a total prize fund of the four-day event.

In the other competitions earlier in the day, Egyptians Mouda Zeyada on Vizalaty took first place in the CSI four-star Zayed bin Hazza and Mohamed Talaat on board Tabea bagged the Bolesworth Small Tour Grand Prix.