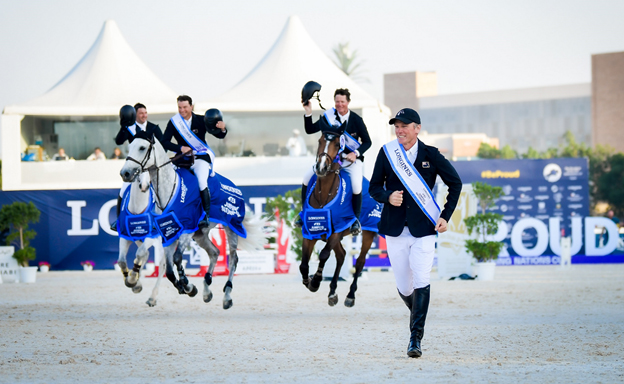 The New Zealand and United Arab Emirates teams led the standings after the halfway stage of the competition, with neither having received any faults in the first round.

The faults saw the UAE fall out of contention for victory.

New Zealand had less difficulty as Daniel Meech completed his second faultless round of the day to clinch victory.

Their team ended with a winning total of eight faults, with Bruce Goodwin and Tom Tarver both receiving four during their second runs.

Richard Gardner had been forced out of the competition after falling in the first round.

“This is only the second time a New Zealand team has ever won a Nations Cup,” said Meech.

“Our first was here in Abu Dhabi in 2018, so this is a really special place for us.

"It was disappointing for Richard because he aimed his horse for this class, but you get used to performing in adversity in this game and we put our heads down and ground out the win."

Egypt finished as the second-placed team in the competition on 17 faults, level with the UAE.

The Egyptian team finished with a faster time overall to edge the hosts in the overall standings.

Three countries were participating in qualification for the FEI Nations Cup Final in Barcelona, with two spots awarded to the best Middle Eastern countries.