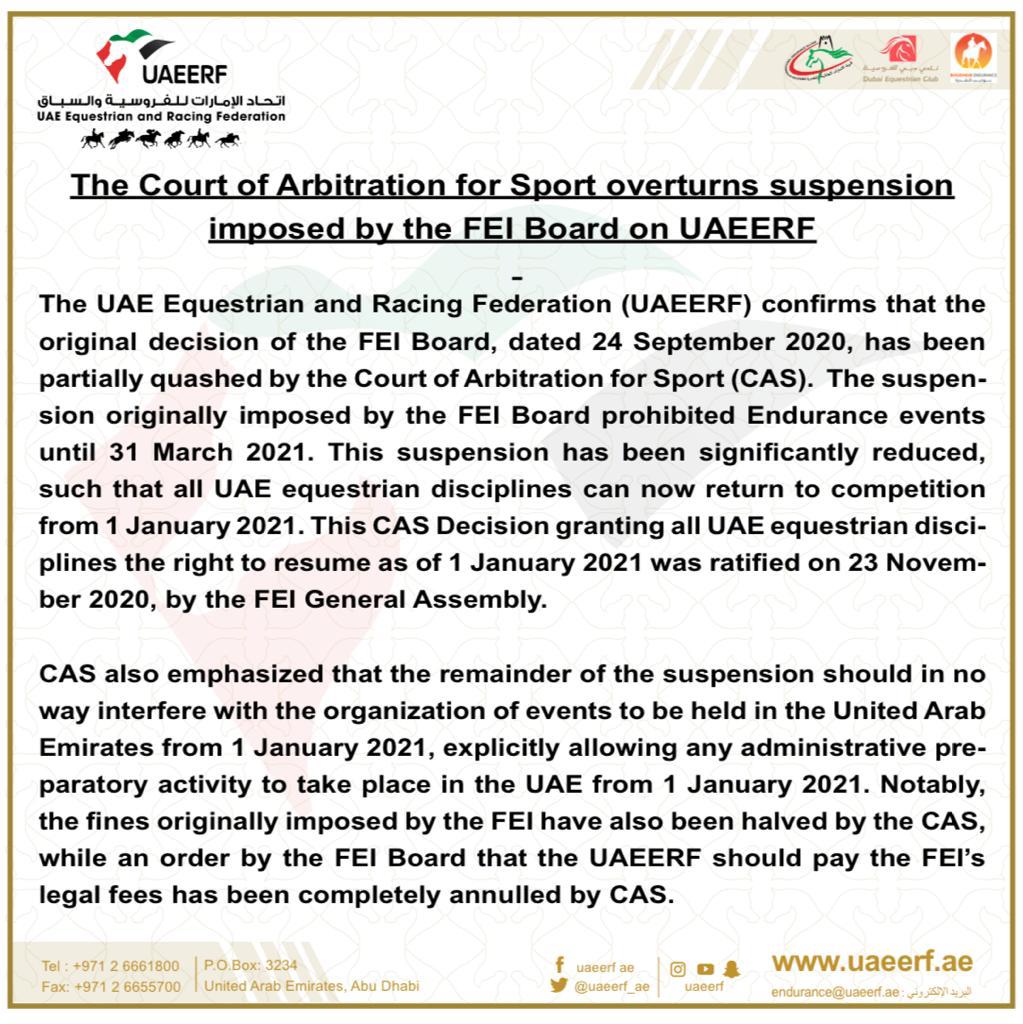 The UAE Equestrian and Racing Federation (UAEERF) confirms that the original decision of the FEI Board, dated 24 September 2020, has been partially quashed by the Court of Arbitration for Sport (CAS).  The suspension originally imposed by the FEI Board prohibited Endurance events until 31 March 2021. This suspension has been significantly reduced, such that all UAE equestrian disciplines can now return to competition from 1 January 2021. This CAS Decision granting all UAE equestrian disciplines the right to resume as of 1 January 2021 was ratified on 23 November 2020, by the FEI General Assembly.

CAS also emphasized that the remainder of the suspension should in no way interfere with the organization of events to be held in the United Arab Emirates from 1 January 2021, explicitly allowing any administrative preparatory activity to take place in the UAE from 1 January 2021. Notably, the fines originally imposed by the FEI have also been halved by the CAS, while an order by the FEI Board that the UAEERF should pay the FEI’s legal fees has been completely annulled by CAS.

The UAEERF Secretary General Dr. Ghanem Al Hajri commented: “We note the significant reduction in the sanctions by CAS.  We considered the original sanctions to have been wholly disproportionate.  We will review the full decision once we have received it before considering any further legal steps.  For now, we are working hard to get riders, owners and organisers back on track from 1 January.”

On September 24, 2020, the UAEERF was suspended by the FEI Board following an investigation into allegations that at two national endurance competitions, the Sheikh Mohammed Cup (held on January 4, 2020) and the President’s Cup (held on February 10, 2020), the number of foreign riders permitted under FEI rules had been exceeded. The suspension was based exclusively on exceeding the foreign rider quota for national events and did not allege any horse welfare or integrity violations.

UAEERF launched an appeal against the FEI’s decision before the CAS.  Following a hearing on 12 and 13 November, the CAS delivered the operative part of its decision on 17 November in which it set aside the FEI Board’s decision, partially upheld the UAEERF’s appeal and reduced the imposed sanctions.

The CAS has decided that the period of suspension should end for all disciplines, including endurance, on 31 December 2020. The administrative suspension has been brought to an immediate end, as the CAS stated that the suspension should in no way interfere with any administrative preparatory activity (including entry into the FEI calendar) of events to take place after the suspension ceases to have effect.   In addition, the CAS has reduced the fines by half, and annulled the imposition of legal costs with the FEI now having to bear its own costs.